In this post I’ll be comparing desks in a Victorian classroom with those in a modern school. You may find the results on the children’s handwriting surprising!

When comparing a Victorian classroom with a modern classroom, you’d notice a number of differences

Perhaps none more so than the very desks children were sitting at! In Victorian times, all of the children sat at individual desks in rows facing the front of class. And the desks at the back were often higher than those at the front. The desks themselves were iron-framed, made out of wood and were often bolted to the floor. This stopped them moving. Similarly, wooden chairs were often attached to the desks in a fixed position. 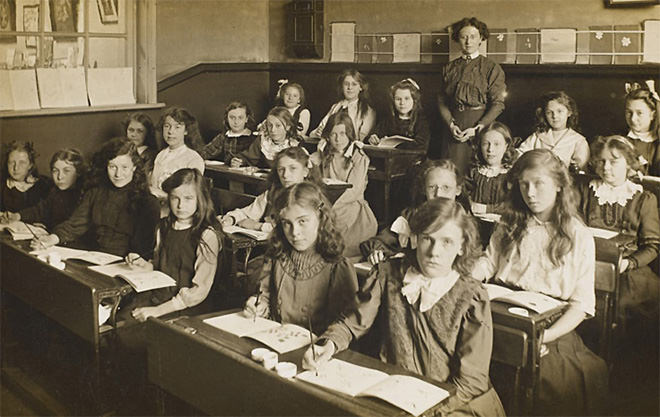 Fast forward to today and classrooms are comparatively higgledy-piggeldy. Desks are often situated amongst larger table groups, and facing all directions in the classroom. Desks today are flat tables made of a variety of materials, there is no fixings to the floor. Chairs too are made of many materials and none are not connecting to the tables. This might seem like an arbitrary matter—after all, it’s just tables and chairs. But actually, those Victorians may have been on to something.

Desks in a Victorian classroom were actually better for children’s handwriting than today’s desks, and here’s why:

Aside from the desks, in Victorian education, there was a lot more repetition when learning. This helped “muscle memory”, meaning that children could write without looking at the page because handwriting became second nature to them. When it comes to desks, it looks like the Victorians had something write.. I mean “right”!

Handwriting practice for kids. A fun guide for grandparents!
Next Post: When is the right time to abandon handwriting for typing?

This site uses Akismet to reduce spam. Learn how your comment data is processed.

This website uses cookies to improve your experience while you navigate through the website. Out of these, the cookies that are categorized as necessary are stored on your browser as they are essential for the working of basic functionalities of the website. We also use third-party cookies that help us analyze and understand how you use this website. These cookies will be stored in your browser only with your consent. You also have the option to opt-out of these cookies. But opting out of some of these cookies may affect your browsing experience.
Necessary Always Enabled

Any cookies that may not be particularly necessary for the website to function and is used specifically to collect user personal data via analytics, ads, other embedded contents are termed as non-necessary cookies. It is mandatory to procure user consent prior to running these cookies on your website.